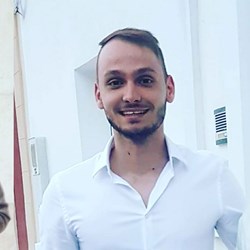 Now that you've helped Mandy to accept the group applications it's time to assist her with a security problem. You are tasked to encrypt all songs from the set list so that if someone steals it they won't be able to leak it online.

Your task is to write a program that encrypts information about artists and their songs.

Until you receive the command "end" you should read lines in following format :"{artist}:{song}", and check if it's valid, considering the following rules:

Valid songs: BACK IN BLACK, BLEED IT OUT, KILLSHOT

Invalid songs: #BaCk IN black, BLEED $IT$ OUTt, &KILLSHoT

After you validate the lines of an input, you should encrypt the information. In order to do that, you have to follow the rules below:

Until you receive "end" command you should read from the console.

After every line of input, you should print: